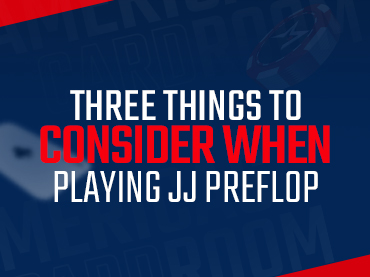 When it comes to playing pocket jacks in poker, it’s important to have a solid preflop strategy in order to maximize your long-term odds of profitability. Preflop strategy with pocket jacks most commonly involves raising from any position and 3-betting most of the time, although there are many preflop scenarios where it would not be advisable to commit one’s entire stack with JJ.

When facing off against other hands, jacks have a strong advantage against the lower pairs of 22-TT as well as hands such as A2-AJ, KJ, and QJ. Even against stronger hands such as AK, AQ, and KQ, jacks remain a favorite of about 56 percent. All in all, jacks are a powerful hand to have preflop and can be played aggressively in many preflop situations.

With that said, jacks are not without their problems. In fact, they are a notoriously difficult hand to play in many large-pot situations. Let’s look at one such preflop scenario – facing a raise and reraise while holding JJ – and take stock of the important things to keep in mind in those moments.

The Scenario: You hold jacks preflop facing a raise and reraise.

When you’re dealt pocket jacks and are suddenly facing two raises, it’s important to consider the specific context of the hand in order to decide the best course of action. Here are some factors to consider:

• Tightness/looseness: Do your opponents tend to play a lot of hands or do they tend to be more selective about the hands that they play? This can give you an idea of the range of hands that they are likely to have in any given situation.

• Aggressiveness/passiveness: Do your opponents tend to be aggressive players, frequently raising and betting, or are they more passive players, tending to call or fold more often? This can give you an idea of how they are likely to play their hands.

• Thinking/non-thinking player: Another factor to consider when analyzing your opponents is whether they are “thinking” players or “non-thinking” players. Thinking players are those who carefully consider their actions and try to make the best decision based on the information, while non-thinking players, act more impulsively and make decisions based on hunches or superstitions. To determine whether your opponents are thinking or non-thinking players, you can observe their play and try to gauge their level of strategy. Have you seen any of their hands go to showdown and if so, has their play made sense to you in terms of what you consider to be sensible poker strategy? If their play has generally been logical and well-reasoned, they are less likely to be getting out of line, while if their play has been erratic and even nonsensical at times, you can likely treat your jacks much more confidently.

For example, if you have a 100 big blind stack and the original raiser and subsequent reraiser only have 10 and 15 big blinds each, the effective stack size of the hand – the most you stand to lose – is 15 big blinds, or just 15% of your true stack size, clearly an important element to add to your considerations of the hand. Of course, if there are larger stacks left to act behind you, your effective stack must be considered with them in mind as well.

3. What is your position? Your position at the table can also affect your decision when facing two raises with pocket jacks. If you’re in early position, you’ll inherently have less information about the other players’ hands and may want to be more cautious in order to avoid making a costly mistake. This is doubly true with deep effective stack size, and may lead to treat your jacks more cautiously, especially in tournament play where you only have one life to live.

No matter what type of game you’re playing, in poker it’s always important to consider more than just the direct strength of your hand. And nowhere is this truer than when holding pocket jacks! By staying locked in every moment of the game, no matter whether you are in the hand or not, you’ll be able to collect valuable information about your opponents and the specific conditions of the match, ultimately making you better equipped to make those few super tough decisions that will often make the difference between cashing out big, or going broke.
Good luck!