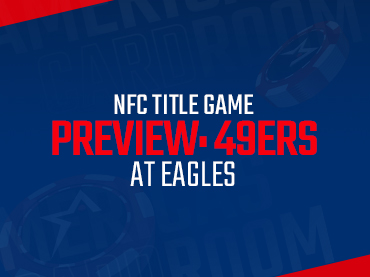 The two best teams in the NFC, the Philadelphia Eagles and San Francisco 49ers, meet in the Conference Title Game this Sunday in the City of Brotherly Love.

Philly is a 2.5-point home favorite at the Americas Cardroom sportsbook with a total of 46. Kickoff comes at 3pm ET, right before the AFC Title Game of Cincinnati (-1.5) at Kansas City.

The Eagles jumped out to a 13-1 record before quarterback Jalen Hurts suffered a sprain to his throwing shoulder on December 18th at Chicago. Hurts missed the next two games (both losses) before returning in the regular season finale win against the Giants to ensure the No. 1 seed.

Hurts then helped lead the team in their first playoff game last week, again at home against the Giants. It was a 38-7 victory as 8-point favorites.

San Francisco has won 12 games in a row after their 19-12 home win over Dallas last week. They are also 9-1 ATS in their last 10 for those betting fans keeping track (we thought you might be!).

This will be the first road playoff game for rookie quarterback Brock Purdy. He has handled all challenges so far, albeit aided greatly by the play-calling of coach Kyle Shanahan and the plethora of weapons at the skill positions.

The 49ers usually dominate teams physically, especially on the defensive side of the ball. However, the Eagles are physical as well and have their rabid home fans behind them. It wouldn’t be surprising to see this spread jump up to -3 by kickoff.