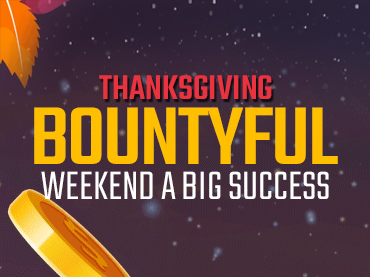 This past weekend was the long Thanksgiving Weekend for our players in the U.S. and it was made extra special for all ACR members with our themed promotion.

The Thanksgiving Bountyful Weekend was three special multi-flight PKO tournaments, with each having their Day 2 yesterday at 6:05pm ET. And all three easily beat their guarantee as you can see below:

What made these PKO tourneys special was that ACR players received DOUBLE the bounty when they knocked out one of the ACR Pros who were playing in the tournaments.

Player: Obelisk1 took home a nice payday by netting an extra $1,754 by knocking out ACR Pro Katie Lindsay in Day 2 of the $215 buy-in $500k Guarantee.  Lindsay ultimately finished in 4th and had this to say about the Bountyful Weekend Tournament:

“It’s funny. I ended up final tabling this event because I was cursing it for 24 hours prior as I wasn’t able to find a bag in all the flights to Day 2. I actually ended up making it through with a good stack on the final flight after several more bullets. I love events like this as someone can play with a couple hundred dollars for huge prize pools.”

In total, ACR players earned an extra $4,649 in bounties by knocking out our ACR Pros.