Prop Bet: Will the Eagles go undefeated in regular season? 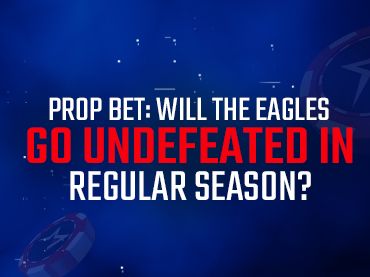 The Philadelphia Eagles (8-0) are the NFL’s only undefeated team and are looking to become the first squad to go undefeated in the regular season since the New England Patriots (16-0) in 2007.

And now, the Americas Cardroom sportsbook has a special prop bet as the Eagles look to make history as the first team to go 17-0 in the regular season.

Looking at Philly’s schedule, the next three games are very winnable, starting with being 11-point home favorites this Monday night vs Washington. The schedule does get tougher from there, starting with a home game against Tennessee and then road games at the NY Giants, Chicago and Dallas.

It is very hard to win three road games in a row in this league and the Giants and Cowboys are also NFC East opponents who obviously know Philly very well.

One more item to consider is Philly could have homefield advantage throughout the NFC wrapped up before those final two home games (or even before). They might want to rest players even if it jeopardizes their perfect season. Remember, New England went full throttle in 2007 to try to obtain their perfect season and some pundits think it wore them down, contributing to their historic Super Bowl loss to the Giants.