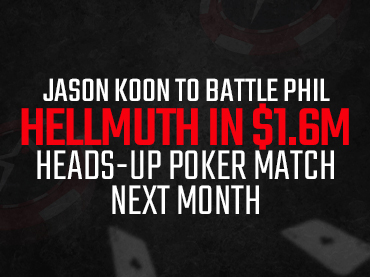 It looks like the most expensive heads-up in history already has a date and time. Exactly one week from today, on Wednesday, December 7 at 5:00 PM PT, exclusively on PokerGO, Phil Hellmuth will face Jason Koon in a new edition of High Stakes Duel III. Whoever the winner is, they will take home the extravagant amount of $1.6 million. It’s certainly a battle that no spectator on Americas Cardroom will want to miss.

This duel was originally a rematch between Poker Brat and Scott Seiver scheduled for three months ago. However, Scott canceled at the last minute for personal reasons. A few days later, Koon was announced as the one to jump in, but the date had not been revealed until now.

Although the prize pool for Round 5 will be $1.6 million, the stakes are not the same for both players. If Hellmuth wins, he could collect the seven-figure prize. But if Koon is victorious, he technically won’t win anything (yet).

It’s important to remember that each set of games starts with two players paying $50,000 to enter. The pot doubles each round and players can’t cash out until they win three rounds in a row.

Hellmuth has a 9-1 record in High Stakes Duel dating back to 2020 when he first defeated Antonio Esfandiari in three consecutive heads-up. He then did the same with Daniel Negreanu before beating Tom Wright. He also went 1-1 against Tom Dwan and beat Seiver in May.

The two upcoming pros in this famous duel have an enviable track record. Hellmuth has won a record 16 World Series of Poker bracelets and has more than $28.4 million in live tournament earnings. Koon, meanwhile, has been one of the most consistent and dominant high-stakes players over the past decade.

With $40.2 million in live tournament cashes, the West Virginia native ranks seventh in all-time live earnings. This will undoubtedly be one of the most interesting duels of recent times, as both players have totally different and contrasting personalities