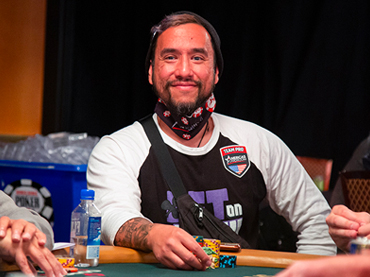 Have you been spending time in our lab?  Of course, we’re referring to our popular “In the Lab” series, which brings you invaluable blog articles and Twitch streams featuring our ACR Pros.  You can count on their insight on a broad range of poker topics.

This week ACR Team Pro Drew Gonzalez is here with a $2/5 LIVE Cash Game Hand Review.  Keep reading for his valuable perspective so you can improve your game.

There was a hand I played recently on a $2/$5 cash game stream where I had opened in the cutoff with A♦️4❤️ to $15. The button calls, and the blinds folded. I went heads up to the flop of 9❤️4♠️T♦️.

I was out of position with a weak pair and decided to check/call a bet of $25 & go from there.

The Turn brought an A♣️ which gave me 2 pair. I had decided I was going to check/raise and try to build a pot with what I thought was the best hand the majority of the time. My opponent bet $50 and I made it $160… BUT THEN SOMETHING HAPPENED… they re-raised me to $350!!!

With no information on my opponent, I decided my hand was too strong to fold just yet, so I called, and we went to a river 6♣️.

Ok, I want to break down this hand and give my thoughts on it. I feel like I made a mistake in not listening to my gut, but maybe this is mostly not a mistake. I’ll let you decide.

I think in a non-streamed cash game, I might just fold the A♦️4❤️ in the cutoff unless I’m at a relatively easy table. I didn’t think this table was an easy one, but it was on stream so I’ll play more hands than normal. The button just calls, which says a lot. I now know going to the flop my opponent doesn’t have the top 5% of their hands (TT+/AQ+).

Now the turn is where things get spicy. I make 2 pair when the A♣️ comes in. Not knowing anything about my opponent I think there’s a chance they could have bet flop with an Ax trying to take down the pot, so the turn could be great for me when they bet again. I check/raise their $50 bet to $160 and pretty quickly they re-raise to $350. This is THE NUTS from most players, especially in a live poker setting.

I took a lot of time thinking about what to do here, and eventually decided my hand is too strong to fold, my opponent could have 9-T or could be overvaluing a hand like AJ, MAYBE AQ… BUT I’ll say our opponent almost never has a draw here, but still I have to call and hope they do at least occasionally ha ha!

River comes a semi-blank 6♣️. The 78 straight did get there but they would never re-raise on the turn and would always just call, so I’m not worried about the river. I check and then am faced with a $500 bet into a $800ish pot. This really REALLY sucks because this line by my opponent is just super super nutted, and honestly, I should consider folding the turn in most of these cases.

FOLD THE TURN to the $350 re-raise is the biggest decision point in this hand for me. Also, this is where I went against my gut & talked myself into calling “they could have 9-T” was the last thought I had before throwing in the call. I just want to take a second and say that “trusting your gut” is something I’ve tried to tell myself and be disciplined about for many years playing this game. There have just been way too many times my gut is right. I’ve learned that we as humans are constantly gathering data, but we are only able to access a small amount of it, and it’s even tougher to access that data in high pressure situations.

BUT I do know, when we study, and are putting focused effort into something — the reps we put in, is us gathering data and in certain moments we have to trust our subconscious instinct in spots because our body/mind knows better than us… AND it will literally tell us what we need to do – but we just have to listen and not worry about the WHY in the moment. The feeling of folding & having to wonder “man was that the right fold” is kind of painful sometimes, but the feeling of “I went against my gut again and paid that player off” is, IMO, much more painful. This is the main point of this whole blog 🙂

As played, on the river I think I can find a fold because the majority of players are checking behind on this river and not likely even betting 9-T, BUT after calling turn I had to a fault decided “they have to only be bluffing sometimes with this sizing and could over value hands”. Oh well, I paid them off anyway!