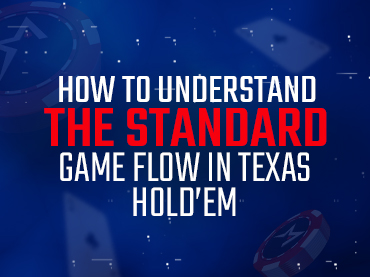 Thanks to the popularity achieved by televised poker, Texas Hold’em has become the most popular poker game in the world both in live casinos and online at Americas Cardroom. Many players choose to start with this variant as it is not very complicated to understand. In fact, the standard game flow is not complicated at all, but you have to pay attention to certain details in order not to get lost along the way.

Texas Hold’em is played using a standard 52-card deck. A game can involve between two and ten players. Before any cards are dealt, players must determine who will have the button (also called dealer) in the next hand. Each player is dealt two cards, which only he/she can see. Subsequently, the dealer deals five cards: three on what’s called the flop, then another card on the turn and, finally, a last card, the river, which all players can use to form the best possible five-card hand.

Before and after each card is revealed, players take turns placing their bets. To stay in the hand and see the next card, all players must have placed the same amount of chips in the pot. The best poker hand wins the pot.

This is an easy game to learn but has the potential to be played in a seemingly infinite variety of strategies, tactics, and nuances. The position of the button at the table determines which two players will post blinds for the hand in play.

Once the forced bets are made, all players receive two hole cards. These can only be seen and used by the player to whom they were dealt. A total of five community cards are then dealt and can be used by all players at the table. The objective of the game is to get the best possible combination of five cards from the seven cards available.