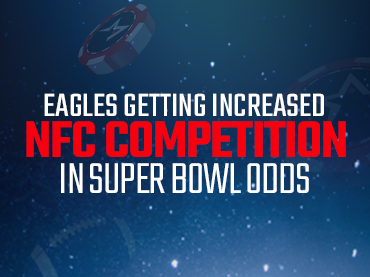 The Philadelphia Eagles became the last remaining NFL team to lose a game this season and it’s caused some tightening at the top of the Super Bowl odds, at least among NFC teams.

Philadelphia’s shocking 32-21 home loss to Washington on Monday Night Football has reduced their Super Bowl odds to +510. They’re suddenly feeling the heat with conference foes San Francisco (+865) and Minnesota (+1053) closing in. The Vikings actually have the same 8-1 mark as Philly but it’s 5-4 San Fran who is capturing bettors’ attention after winning two straight, and having a very talented roster overall.

Looking at the very top of the board, Buffalo (+385) is somewhat surprisingly still the favorite despite losing their second-straight game. The Bills need to start playing a lot better quickly with Kansas City (+460) right on their heels.

One team that has dropped off the list from the last article (two weeks ago) is the L.A. Rams. The defending-champs are now 3-6, dealing with significant injuries, and almost definitely won’t make the playoff. Their motto of “f-ck them picks” will likely be regretted come next year’s draft.

You can see all the Super Bowl odds favorites below at the Americas Cardroom sportsbook. To see all the NFL game, prop and future odds, just click on ‘Sports’ in the poker client.