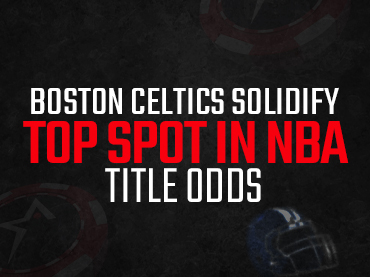 The Boston Celtics began this season coming off a crushing NBA Finals loss and then lost their coach (Ime Udoka) after a minimum year-long suspension. The team then had a somewhat sluggish 4-3 start to the regular season and it looked like the fortunes could go either way for the “Men in Green”.

Now, fast forward to today (Tuesday) and you see that Boston has the best record (17-4) in the NBA after going 13-1 in their last 14 games. They are also 9-2 ATS in their last 11 and claim the top spot (+425) in the updated NBA title odds at the Americas Cardroom sportsbook.

Right behind Boston is Milwaukee (+525), who is not only very talented, but presents a size mismatch against Boston down low. It wouldn’t be surprising to see Boston and Milwaukee remain the two best teams in the league and meet up in the Eastern Conference Finals.

The West Conference is a lot more muddled with defending-champ Golden State (+715) having the best title odds despite having the conference’s 8th-best mark (11-10) . Phoenix (14-6) has the best record in the conference after winning five-straight games and they look like a very good value at their current +900 odds.