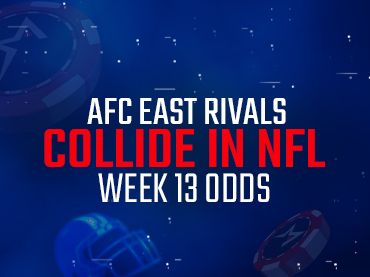 The New England Patriots’ defense will be under the microscope when they host their AFC East rivals Buffalo Bills on Thursday night. This is the start of Week 13 of the NFL season.

New England is a 5.5-point home underdog at the Americas Cardroom sportsbook with a total of 43.5. The Patriots absolutely dominated this rivalry during the Tom Brady era, but the tables have now turned. New England lost two of three to Buffalo last season and didn’t force the Bills to punt once in the last two games (both losses), including the 47-17 road playoff debacle in the wild-card round.

A couple of other interesting games this week are Cleveland (-7.5) at Houston and Kansas City (-2) at Cincinnati. This is expected to be the season debut after suspension for Cleveland quarterback Deshaun Watson and it will be against his old team. Kansas City will be looking for revenge after shockingly losing at home to Cincinnati in last year’s AFC title game.

See all the Week 13 NFL odds below. To see the rest of the sportsbook, just click on ‘Sports’ in the poker client.