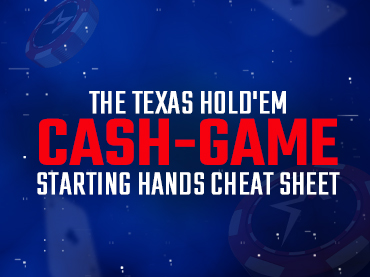 Poker is a game that has been around for centuries. The exact origins of poker are unknown, but it is thought to have originated in Persia, or perhaps China. What we do know is that poker was being played in the United States by the early 1800s, and it quickly became popular. In fact, some of the earliest known poker players were famous Americans like Andrew Jackson and Abraham Lincoln.

As poker fans already know, poker is both a game of chance, but also a game of skill. The better you are at poker, the more likely you are to win. One of the most important skills in poker is knowing which starting hands to play and which to fold. There are many different ways to approach this, but we have put together a starting-hands cheat sheet to help you make the right decision. With that in mind, let’s get into the many sorts of Texas Hold’em starting hands and have a look at the optimal way to play them preflop while working on your game.

The easiest hand to play. Raise, reraise, and get as much money into the pot as possible. Of course, when we’re talking about maximizing our equity against specific player types (for example, “nits” who will fold everything to a 4-bet) or game types (specifically late-stage satellite play), we can sometimes deviate from the ‘pile it all in’ strategy, but absent those few specific factors, the question with aces is always how can I get more chips into the pot (at least preflop).

Although we’ve all seen the KK hero-folds on TV and YouTube, the truth is that there’s very rarely a good enough reason not to get all your chips into the middle holding kings preflop. If you happen to run into aces and get felted so be it, you can take comfort that the results will almost undoubtedly be the same the next time when the hands are reversed.

This is the time to apply some aggression while staying cautious against any overt counter-aggression. Depending on the game you find yourself in, there likely won’t be too many players stacking off with 100BB+ with hands much worse than this, especially at the non-micro limits. Although you’ll sometimes get someone to pay you off with a hand like 99, AK, or AQs, the majority of the time you’ll be facing bad news when getting stacks in with the lower end of the mid pocket-pairs so it’s critical to have a handle on both the flow of the specific game you’re in, as well as the particular opponent you’re facing before over-committing to these hands.

While these hands can be played somewhat aggressively in the right situation (late position, tight opponents, against an aggressive late-position “stealer”), the majority of the value of these hands will be in the set-mining capacity. More often than not, the lower pocket-pairs will be looking to flop a set (three of a kind) and extract value from someone overplaying a high-pair hand.

This grouping of hands is a great option for aggressive preflop play, be it as the initial raiser or as a three-bettor (reraiser). The ideal situation with these types of hands is to raise them into loose opponents and then extract max value when they flop a worse top pair on a board such as Axx or Kxx. With that said, barring some extreme examples, if your opponent suddenly comes to life postflop – especially with check-raises and overbets if they don’t have a history of making wild bluffs – it’s best to proceed cautiously and not over-commit. Remember, just as we were looking to trap over-pairs with our low pocket pairs turned into sets, so too will our opponents.

The potential value of these hands lies in the draw to the flush and/or straight. If you can flop a big draw like an open-ended straight, then you have a great shot at winning a large pot as people will often pay you off with top pair or two-pair type hands. These types of hands also make great options to check-raise postflop so that you have some unmade hands (draws) in that range and you’re not just doing it with your big hands (otherwise your opponents can correctly fold almost any hand versus your postflop aggression).

Suited aces, especially the low ones that can make a straight, are fantastic hands to balance your preflop reraising range since having an ace in your hand reduces the likelihood your opponent has one in theirs while often giving you the type of unmade postflop hand (straight draws/flush draws) that can continue to apply pressure. For these reasons, many professionals love using this type of hand to 3-bet and 4-bet bluff with since it’s an easy fold if your opponent comes back over the top.

Although the best poker players can often make money with a wide variety of non-premium starting hands, for anyone still developing their poker skills, most of these hands will be long-term losers. As such, it’s best to use the upper end of them for very straight-forward late-position stealing or big-blind defending, and making sure not to over-commit when flopping middling value such as a weak top pair, gut shot draws, etc.

Hopefully this Cheat Sheet has provided you with a clear understanding of what types of hands to play in different situations at the Texas Hold’em tables. As always, remember that the best way to get better at poker is to practice and learn as much as you can. Good luck!