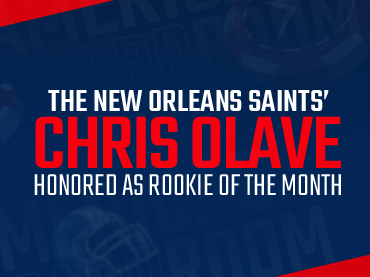 New Orleans Saints wide receiver Chris Olave was named the NFL’s September Offensive Rookie of the Month, the league announced yesterday. It didn’t take long for the player to show his worth and he now has major honors to his name. Fans on Americas Cardroom are hoping the rookie will continue that performance and help the team get back on its feet Sunday in Europe.

Through three games this season, Olave has caught 17 passes for 268 yards, averaging nearly 16 yards per reception. After making tons of big plays at Ohio State, Olave is proving to have the same type of impact at the next level.

The New Orleans Saints selected Olave with the No. 11 overall selection in the 2022 NFL Draft to play alongside receiver Michael Thomas. Through his first three games with the organization, Olave has hauled in 17 passes for 268 yards, the most receiving yards of any rookie in the league. He trails only former New York Jets teammate and wide receiver Garrett Wilson (18) by one catch for the rookie lead in receptions.

The last former Buckeye to win the league’s rookie of the month award was defensive end, Chase Young of the Washington Commanders, in December 2020. He went on to become the NFL’s defensive rookie of the year that season, following in the footsteps of the San Francisco 49ers edge rusher Nick Bosa, who captured the award in 2019.

On the other side of the ball, Jacksonville Jaguars linebacker Devin Lloyd received this month’s defensive honor. Lloyd seems to be accomplishing some remarkable things and the Jaguars are grateful for the decision to consider him for this new season.