The Lazarus Group is using Crypto.com to ship malware to macOS devices 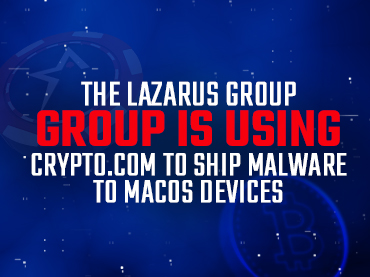 In the latest variant of the campaign spotted by cybersecurity firm SentinelOne last week, the decoy documents advertise positions for Singapore-based cryptocurrency exchange firm Crypto.com. According to an advisory published Monday, the new attacks would represent a further instance of a campaign detected by ESET and Malwarebytes in August and attributed to Lazarus Group, an advanced persistent threat linked to North Korea.

These fake job ads are just the latest in a series of attacks dubbed Operation In(ter)ception, which, in turn, is a component of a broader campaign tracked under the name Operation Dream Job. While the exact distribution vector for the malware is unknown, it is suspected that potential targets are being singled out through direct messages on the business networking site LinkedIn.

The intrusions begin with the deployment of a Mach-O binary, a dropper that opens the decoy PDF document containing job postings on Crypto.com. At the same time, in the background, deleting the Terminal saved state. The downloader, also similar to the safarifontagent library employed in the Coinbase attack chain, subsequently acts as a conduit for a basic second-stage package called “WifiAnalyticsServ.app,” which is a copied version of “FinderFontsUpdater.app.”

Attacks such as these are not isolated, as Lazarus Group has a history of cyberattacks on blockchain and cryptocurrency platforms as a mechanism to evade sanctions. This allows the criminal group to gain unauthorized access to enterprise networks and steal digital funds. Crypto users on Americas Cardroom are advised to be wary of advertisements such as these.