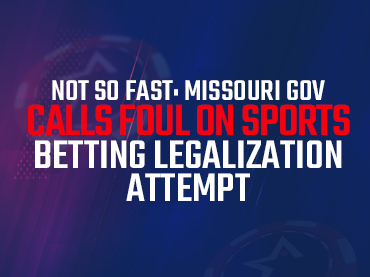 The same week lawmakers tried to find a path for sports betting, the governor throws a flag on the play

Recent news on Americas Cardroom indicated that Missouri appeared poised to become one of the states where sports betting is legal. However, these illusions may now have faded thanks to the handbrake recently put in place by Governor Mike Parson.

A special session was supposed to be used to discuss the issue and fine-tune the details of sports betting, but Parson has put the brakes on that last push to regulate the practice beginning this week. That being the case, the Missouri House of Representatives’ efforts have now been in vain.

It was the Republican governor who called a special session to address a cut in state income tax rates. Many lawmakers in the Show Me State planned to use that same space to discuss sports betting, especially after seeing fellow member Dan Houx introduce a bill to that end a few days ago. Many at the Capitol seemed intent on looking at the proposal, but the governor had no such stance.

Houx intended for Missouri not to be left behind in the race that many neighboring states are already taking the lead in. To accomplish that, he wanted to legalize sports betting by allowing retail sports games at state riverboat casinos and granting mobile licenses for online operators. To the chagrin of many, those plans have now been thrown out of the window as the person with the most legislative power said no.