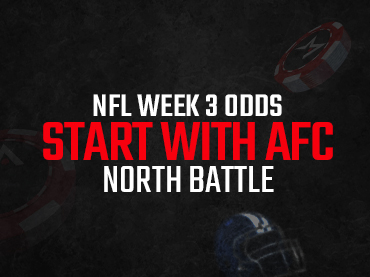 It’s a battle of AFC North rivals when the Pittsburgh Steelers visit the Cleveland Browns on Thursday night to start Week 3 of the NFL season.

The Americas Cardroom sportsbook has Cleveland as 4.5-point home favorites with a total of 38 points. That’s the lowest total on the board this week. Both teams won in Week 1 before losing last week.

The marquee matchup of the week is the Tampa Bay Buccaneers hosting the Green Bay Packers. The Bucs are 1-point home favorites and there’s a good chance it will be the last matchup ever between quarterbacks Tom Brady and Aaron Rodgers.

Last week was a big one for underdogs, going 10-5-1 against the spread. This week, there are lots of small spreads, with every game under a touchdown. Note that Jacksonville at the Chargers is a No Line right now.

One more betting note is that the Under is 22-10 through the first two weeks.

Take a look at all the Week 3 odds below. To see the rest of the sportsbook, just click on ‘Sports’ in the poker client.