Heads-Up Party kicks off with pair of midweek battles 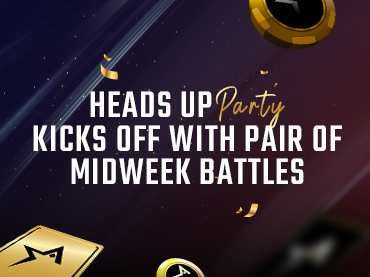 Did you spend Wednesday afternoon streaming exciting poker action on Twitch?  If you didn’t, then you missed the first two battles of our Heads-Up Party.  Don’t worry, though.  We’ll get you up to speed.

Just to recap, the Heads-Up Party is a 16-player poker bracket that’s part of our 21st Anniversary Celebration. All rounds are broadcast on Twitch with live commentary from our pros.   The sudden-death heads-up format features a mix of ACR Pros, streamers, special guests, and one lucky member of the poker community.  The player who makes their way through the entire bracket will win Venom tickets for the entire year.  At $2,650 a piece, that’s $10,600 in total value.

Yesterday’s action kicked off with a pair of ACR Pros entering the fray.  Michael Loncar (screenname: FerrisBuuueller) faced off against Ryan Depaulo (screenname: Whyisjadakiss) in what turned out to be a one-sided contest.

After less than 24 minutes of play, the pair began what proved to the final hand with Depaulo having a convincing 15,088 to 4,732 chip lead. With 7♠J♦A♠K♠ on the board, Depaulo’s Q♠10♦ was already good enough for a straight.  And after Depaulo went all-in, Loncar followed his lead holding A♥J♠.  When a 10♦ appeared on the river, Depaulo officially earned his place in the second round of our Heads-Up Party.

However, heading into the final hand, ZAFSTOP had a commanding 16,585 to 3,035 chip lead.  With 9♠K♠, ZAFSTOP went all in pre-flop, forcing Apestyles to call with A♥4♥.  After a 2♥9♥7♠ flop, Apestyles was still in the game.  When faced with an 8♣ turn and 5♦ river, Apestyles’ fate was sealed and ZAFSTOP officially completed the upset to advance to the next round.

Don’t forget that the Heads-Up Party resumes tomorrow (Friday) at 4:30pm ET with Jon Pardy battling Robert Kuhn.  Then Chris Moneymaker takes on our Social Media contest winner in what is sure to be an interesting match.