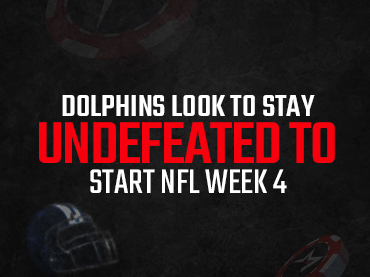 The Miami Dolphins (3-0) look to keep their undefeated season alive when they visit the Cincinnati Bengals to start Week 4 of the NFL season on Thursday night.

The Americas Cardroom sportsbook has Miami as 3.5-point road ‘dogs with a total of 48.5 points. That spread seems surprising, but Miami quarterback Tua Tagovailoa is dealing with back/ankle injuries, although is expected to play.

There are also two interesting venue notes to mention. First is that Minnesota (-2.5) will be playing New Orleans in London so make sure you note the early 9:30am ET start time on Sunday.

The Sunday night game of Kansas City (Even) at Tampa Bay could be moved due to the recent Hurricane, although the major says he wants it to stay in Tampa. The game will reportedly be moved to Minneapolis as a backup, which would create a homefield advantage for the Chiefs (just a 6-hour drive away).

Take a look at all the Week 4 odds below. To see the rest of the sportsbook, just click on ‘Sports’ in the poker client.