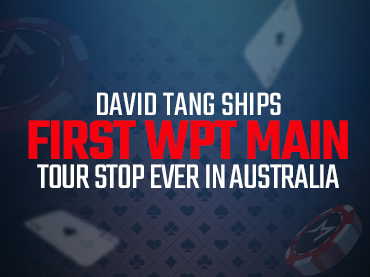 The World Poker Tour (WPT) does not stop expanding throughout the different continents, and this time it landed in Oceania to leave the local David Tang with the title of champion. For the first time in history, the Main Tour WPT Australia was held at The Star Gold Coast Casino from September 23rd to 27th. This first call left more than 700 entries that added up to an incredible prize pool of more than $2 million, which was shared among the best 89 players.

After several days of competition, Tang was able to take advantage of his home venue to win a prize of $425,712. His name will be added to the Mike Sexton WPT Champions Cup and he also won a package that includes a trip to Las Vegas to play in the season-ending WPT Championship. This event will be held in December and will have a $10,400 buy-in.

“I’m still a little stunned, but it’s unbelievable,” said the pro after getting this big win. “I didn’t expect to make it this far. To be honest, I was actually trying to cancel my flight here because I wanted to watch the (Australian Football League) Grand Final in Melbourne, but we didn’t get a refund for our flights, so it all worked out.”

The final showdown was between Tang (14.5M) and Po Ho (21M). In one of the first hands, Po Ho went all-in with Q-10 and Tang paid with K-Q, to double up. On the next hand, Tang went all-in with K-10 and Ho paid with his remaining hand and A-8. The board brought 3 diamonds and that favored Tang to emerge crowned the champion.

Now the tour prepares for the WPT Five Diamond World Poker Classic to be played October 7-23 at the Bellagio Resort & Casino with a $10,400 buy-in Main Event. Fans in the Americas Cardroom certainly still have plenty of poker events to enjoy before the year is over.