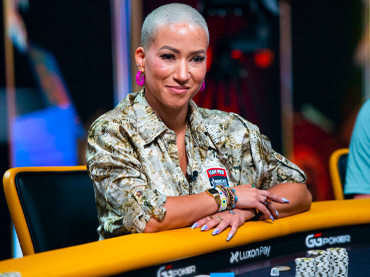 The Triton Poker Series in Cyprus just got underway this past Monday and our ACR Pro Ebony Kenney is already one of the biggest stars of the show.

Kenney finished in 5th place out of 130 players in Event #1 $50K NLH 6-Handed. She not only pocketed over $240,000 for her efforts, but she also made history by becoming the first woman to final table in her inaugural Triton tournament.

After a fierce fight battling 130 other entrants, our 5th place finisher in the Triton Poker High Roller Series Event #1 $25k NLH-8 is @Ebony_Kenney ! Congratulations on an amazing Triton Poker debut, taking home $240,500 for your efforts. 🔥🔱 pic.twitter.com/013No6Tzav

Now, Kenney is back at it today in Event #3 $50K NLH 6-Handed. Will she be able to make her second final table in a row? We wouldn’t put anything past her!

Note that these opening events all lead to the Coin Rivet Invitational which runs from September 10th-12th. That’s when Kenney and our CEO Phil Nagy will enter the $200,000 + $10,000 buy-in NLH single re-entry tournament.

That tourney is capped at 64 players consisting of 32 professionals and 32 recreational players. And the total prize pool is expected to hit eight figures!

We’ll continue to keep you up to date on all the action from Cyprus here in the Big Blind Blog. You can also get more information on the Triton Poker Series here.