The 5 Most Common Beginner Mistakes in Poker 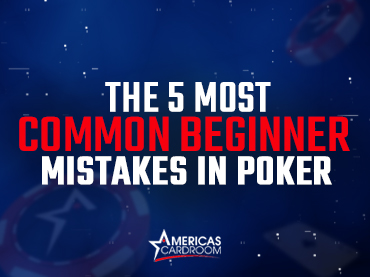 When you’re just starting out in poker, there are a lot of things to learn and a lot of new terminologies to wrap your head around. This can make it tricky to avoid making critical mistakes, especially if you’re not used to dealing with complex strategic decisions.

1. Playing too many hands

When you’re starting out, it’s easy to get carried away and try and play every hand. But this can quickly become expensive as you’ll end up putting money in the pot in situations when, mathematically speaking, you’re not likely to win. Thus, it’s important to be patient and employ a ‘tight aggressive’ approach where you play a well-defined and narrow selection of hands while remaining aggressive any time you do enter the pot.

That’s right, just as playing too many hands is a problem, so too is playing too few! If you’re only playing the very best starting hands, then you’re likely to find yourself in a lot of situations where you’re not involved in the pot and thus see your stack getting eaten away by the blinds and antes, especially in tournaments. While it’s certainly true that the best way to make money playing poker today is by playing a relatively tight strategy, it’s equally important to ensure you play enough hands to give yourself an opportunity to compete.

Bluffing is one of the most important aspects of poker, but it’s also one of the hardest things to do correctly. Many beginners are scared to bluff because they don’t want to feel embarrassed when they get their hand “caught in the cookie jar” and bluff into the “nuts” (the best possible hand).

However, if you never bluff, then you’re going to both miss out on a ton of value by not getting your opponents to fold the best hand and are going to make yourself highly predictable when playing against experienced players. Conversely, if you bluff too much, then you’re going to get called and raised a lot and likely wind up broke even faster than when not bluffing enough. The key is to be strategic about when and how you bluff, and not get too attached to any one particular hand.

Position is one of the most important factors in poker, yet it’s also one of the easiest things to overlook. Simply stated, when you’re playing from early position, you’ll have less information about what your opponents are holding and therefore you need to be more cautious with your bets. Conversely, when you’re in late position you’ll have more information and should be more aggressive with your bets.

The key is to use your position relative to the button (the dealer) to your advantage and adjust your playstyle accordingly. Most importantly, you want to make sure that, as a general rule, you spend as much time playing “in position” – meaning that you get to act after your opponent – and minimize the number of big pots you spend playing “out of position” (acting before your opponent). Of course, if you have a read that an opponent is overplaying his position, or that he’s weak at playing against counter-aggression (i.e. check-raising), then you can expand your out-of-position ranges accordingly, though likely not by a huge margin.

5. Not studying the game enough

Poker is a complex game that takes years to master. If you want to be successful, it’s imperative that you consistently study the game and learn as much as you can about both strategy and theory. There are plenty of resources available online (including this very blog!) so there’s no excuse for not putting in as much work off the table as you do on it!

By avoiding these five mistakes, as well as practicing good bankroll management, you’ll put yourself in a better position to avoid going bust and be well on your way to transforming yourself from a poker fish to a poker shark. Just remember to keep studying and practicing, and don’t get too discouraged if you have a few bad sessions – everyone has them from time to time.