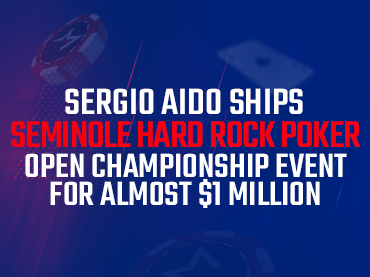 The $5,300 buy-in event saw a prize pool that reached more than $5 million

The Asturian won the SHRPO yesterday, a tournament that in this 2022 edition has managed to reach 1,110 entries. At a rate of $5,300 per entry, the prize pool was set at $5.383,500, bursting the $3 million guaranteed that the organization had set.

On Monday, they had played until the field was reduced to just seven players, who returned two days ago to contest the final action with $154,185 guaranteed each. But with an eye on the $900,100 that was up for grabs for the winner and the iconic guitar-shaped trophy.

The Spaniard arrived at this stage with a 47bb stack in provisional fourth place but managed to turn that fourth-place finish into a win, something not many Americas Cardroom fans saw coming. Ryan Gianquitti and Ugis Steinman started as the short stacks and failed to change the script of their adventure, and were the first eliminated of the day in seventh and sixth place, respectively.

In the end, the champion was Aido, who managed to take home almost $1 million after beating Jim Collopy in the final confrontation, who had to settle for the $614,775 for second place. “There was a lot of play. I’m very happy with the way I played. I’m living in Mexico now. It’s closer to Miami, and I think this stop will be on my agenda in the next few months. So I will be back for sure,” commented the recent champion.