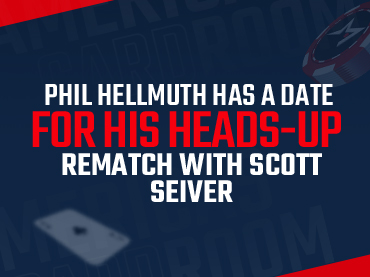 One of today’s most attractive showdowns, the High Stakes Duel, has released more details of its next edition, which will feature US professionals Phil Hellmuth and Scott Seiver. The wait for this long-awaited news took a while, but Americas Cardroom fans can rest assured that there is already a date set on the calendar for this great showdown.

With $1.6 million at stake, this will be a historic heads-up for PokerGo with the largest prize pool ever distributed in this type of tournament. This installment of the High Stakes Duel will be broadcast live on the streaming platform on Monday, August 22 at 8:00 PM ET and will take place at the PokerGO Studio in Las Vegas. Depending on the results, there is a possibility that the prize pool could reach $3.2 million.

If Hellmuth is able to get past Seiver in this fifth round, he will have the option to walk away with his third championship belt after winning enough consecutive matches to earn the right to do so. A win by his opponent would push the competition into Round Six with the aforementioned $3.2 million on the line and with the Poker Brat having the first right to a rematch.

It should be remembered that to get to this stage, the winner of 16 World Series of Poker (WSOP) bracelets previously defeated Tom Dwan in Round Three of High Stakes Duel III and then overcame Seiver in Round Four before Seiver exercised his right to a rematch. According to the rules, stakes are doubled in each round. A player can be victorious if he wins three consecutive matches before Round Four or two consecutive matches after.