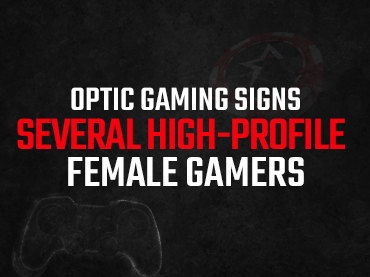 The eSports organization now has CodeMiko, JustAMinx and others on its roster

The well-established eSports organization OpTic Gaming has officially signed four of Twitch’s most popular female streamers. The new contracts went to content creators CodeMiko and JustAMinx, as well as Alexandra and Andrea Botez. Many on Americas Cardroom know that when it comes to popular female creators on Twitch, CodeMiko, JustAMinx, and the Botez Sisters are at the top of that top.

In an announcement shared two days ago, OpTic Gaming revealed that they had signed with the infamous group of friends, a move that goes a long way to boost their roster of content creators. The announcement was well received by the streaming community and many fans celebrated the news on different social media platforms.

While it is true that the four new signings were previously from Envy (which is technically OpTic Gaming), many in the space have to assume that this was done to reflect the organization’s recent changes and interests. Be that as it may, the combination of these forces makes for a massive pool of impeccable talent that the organization has under its name.

The Botez sisters are Canadian-Romanian chess players, both of whom have high ratings on YouTube and Twitch platforms. Over time they have worked hard to grow a community of millions, accumulating even more views through their online content.

CodeMiko, on the other hand, has amazed online viewers through intricate yet fun videos. And lastly, JustaMinx, an Irish YouTuber and Twitch content creator, continues to achieve new feats as an entertainment creator amassing two million followers on this platform.

Located in Frisco, TX, OpTic Gaming is today one of the largest eSports organizations in the country. It was founded in 2006 and it didn’t take long for it to rise to the top of the professional Call of Duty scene. The organization’s gaming division consists of professional teams for prominent eSports titles such as Apex Legends, Halo, Valorant, League of Legends, and Rocket League.