Negreanu, Polk, and others sign on to participate in the StormX Invitational poker tourney 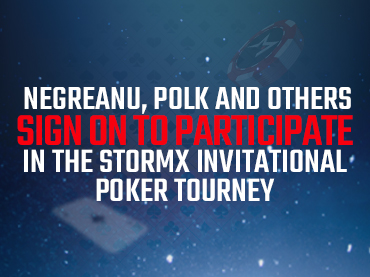 In order to once again showcase the mutual interests that exist between the poker and crypto communities, PokerGO and StormX have once again joined forces to bring a star-studded event captured in action. Fans of Americas Cardroom will be able to see recognized names such as Maria Ho (who is now a StormX ambassador), Daniel Negreanu, and Doug Polk.

Leading Crypto Cashback provider and PokerGo’s exclusive cryptocurrency partner, has once again done the necessary paperwork to announce the return of the StormX Invitational poker tournament. The event is scheduled to take place on October 27, with the PokerGO Studio in Las Vegas being the meeting point for many professionals.

In a new adventure together, PokerGO and StormX have decided to bring back a star-studded event and share the different tastes of the poker and cryptocurrency world. With an entry fee of $5,000, the poker tournament is invitation-only and has already confirmed the presence of great players who will seek to compete for an estimated prize of $400,000.

“The first-ever StormX Invitational Poker Tournament was such a hit that we absolutely had to run it back for a second year,” said Simon Yu, CEO, and Co-Founder of StormX. “We are proud to continue to grow our partnership with PokerGO and create another can’t-miss event for crypto and poker enthusiasts both competing on the felt and watching from around the world.”

Streaming platforms on PokerGO and YouTube will bring the event to fans’ homes. This event is one of the results of a multi-year agreement that was recently signed between PokerGO and StormX.

Maryland might be trying to expedite online sports betting
22 mins