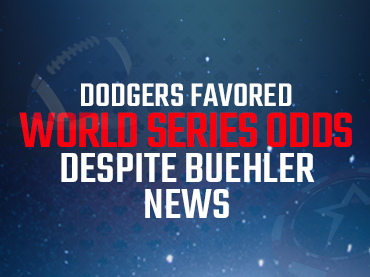 The Los Angeles Dodgers received a blow to their World Series chances on Monday when it was announced that starting pitcher Walker Buehler would be lost for the season with an elbow injury.

Buehler hasn’t pitched since June but there was hope that he could come back and be the team ace for the playoffs. The Dodgers (80-34) have the best record in baseball and the best ERA (2.88) but the loss of Buehler certainly hurts, as evidenced by this quote (courtesy of ESPN) from manager Dave Roberts:

“It’s certainly a blow. We’re better with Walker on our ballclub, but there’s nothing we can do about it. I still believe we have enough guys to prevent runs to get through October, but yeah, we wanted him to be a part of this.”

Despite the latest news, the Dodgers are still the +333 favorite in the updated World Series odds at the Americas Cardroom sportsbook. You can see the odds from two weeks ago in parenthesis.

One of the other items of note is that Houston (+355) has overtaken the struggling New York Yankees (+420) as the favored team from the American League.

To see all the MLB future, game and prop odds by clicking on ‘Sports’ in the poker client.