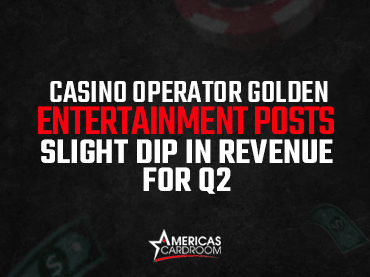 Golden Entertainment, a major Nevada-based casino operator, was one of the first to release results for the second quarter of 2022 last week. While the report was widely expected, the company generated $289.4 million in revenue for the period ended June 30, signifying a slight 1% decline from the same period in 2021. It is possible that updates on Americas Cardroom from other operators will come with comparative green numbers.

The prior-year period saw adjusted EBITDA of $91 million; however, that figure suffered an 18% decline in the latest report after reporting $75 million. In addition, an adjusted EBITDA margin of 26% was reported versus an adjusted EBITDA of 31% in the second quarter of 2021. On the other hand, the operator’s net income for the period was $21.2 million, down from $103 million.

“Our operating discipline supported strong second quarter results and offset challenges in the current economic environment,” said Blake Sartini, Chairman and CEO of Golden Entertainment, referring to the issue. “We have maintained our Adjusted EBITDA margin over the last four quarters as we continue to exceed 2019 performance levels.”

Figures for its Nevada Casino resorts were also broken down by the firm, posting revenues of nearly $40 million. This was a drop compared to the $43.5 million achieved during the second quarter of last year. Adjusted EBITDA was $19.8 million, compared to $23.6 million last year.