AFC Division odds before Week 1 of the Preseason 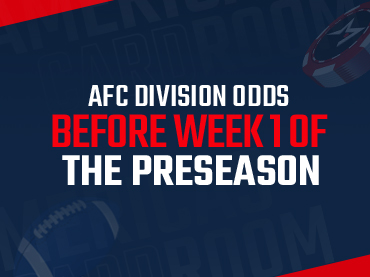 The full Week 1 of the NFL Preseason gets underway tomorrow (Thursday) night with two games, the NY Giants (-2) at New England and Tennessee (+3.5) at Baltimore.

Here at the Americas Cardroom sportsbook, we have the betting odds for every preseason game, plus conference and Super Bowl futures, as well as Regular Season Win Totals.

We also have the updated division odds. These can be a great way to win some money on a long shot. After all, Cincinnati was +2200 to win the AFC North when we wrote this article last year. Not only did the Bengals the division, but they advanced all the way to the Super Bowl before losing to the Rams. Now, Cincinnati is just +176 to win the AFC North this season.

The tightest of all the AFC division races is the West, according to the odds. That’s because Kansas City (who was -328 last year) is now +167 after losing receiver Tyreek Hill and others. It wouldn’t shock me if any of the four teams won the AFC West, including the Raiders and new head coach Josh McDaniels.

Check out the updated AFC Division odds below: