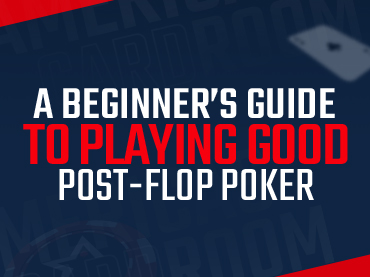 If you’re just starting out playing poker, post-flop play can be a difficult concept to wrap your head around. The good news is that with a little bit of guidance, you can start playing good poker post-flop and give yourself a better chance of winning. In this beginner’s guide, we will go over 4 things to keep in mind during post-flop play so that you can put yourself in a better position to win some money. But before we get started, it’s important to keep in mind that post-flop play can, and often will be, dramatically different than preflop play. This is because once the flop is dealt, players have all seen three of the five community cards, giving them a much better idea of the potential of their hand.

With that said, here are a few general tips to keep in mind when playing post-flop poker:

1. Building on the idea in the previous paragraph, the first thing you need to do is assess the strength of your hand.

This may seem like an obvious piece of advice, but it’s important to remember that the value of your hand can change drastically after the flop. For example, if you have a pocket pair of aces (AcAs) preflop, you have a very strong hand (the best, in fact). However, if the flop comes 9TJ all diamonds, your hand is no longer as strong, especially when playing against multiple opponents. This means that one of the key principles of strong post-flop play is to be able to decipher who has the range advantage (aka is most likely to have the best hand) based on the preflop play. Coincidentally, one of the biggest mistakes inexperienced poker players make is ‘getting married’ to their hand and committing far too many chips in a spot they are unlikely to come out ahead in — so make sure you are constantly assessing the strength of your hand based on all the information present and adjusting your play accordingly.

2. Another important thing to keep in mind is that you need to be aware of the board texture.

The board texture refers to the combination of community cards that have been dealt. Some board textures are more favorable for certain hands than others. For example, a “wet” or “drawy” board is one that has a lot of potential for flush or straight draws. On the other hand, a “dry” board (such as 37J) is one that isn’t conducive to drawing hands. This means that if your opponent is likely (based on position and preflop play) to be holding a hand that wouldn’t do well on a wet board, you can employ much more aggressive post-flop strategies such as floating and check-raising.

3. Speaking of position, this is one of the key elements of strong post-flop play.

Your position relative to the dealer button will likely have a big impact on how you should play your hand. For example, if you’re in early position (the first few seats to the left of the button), you should generally only play strong hands preflop. On the other hand, if you’re in late position (the last few seats to the right of the button), you can be a bit more liberal with the types of hands you play. This has a significant impact on post-flop play as well since you’ll have a better idea of how your opponents are likely to play their hands. If you flat-called an early-position raise in the cutoff, for example, and the flop brings a board that doesn’t connect particularly well to a range of the top 10-15% of hands (such as 78Ts), you can play your draws much more aggressively, knowing that it will be tough for your opponent to get too committed if the turn or river present even more danger to a hand such as an overpair or AK/AQ/KQ type hands.

4. Finally, you need to be aware of your opponents’ tendencies.

This is perhaps the most important thing to keep in mind when playing post-flop poker. You need to pay attention to how your opponents are playing and try to get a read on their tendencies. If you can do this well, it will give you a huge advantage over the other players at the table. This is doubly critical in a live poker setting (as opposed to online) — since you’ll be able to observe your opponents’ mannerisms first-hand. For example, if you’re facing an inexperienced live-poker player who takes a long look at their hole-cards after a wet flop, it is unlikely that they hold a big hand. After all, if they were holding AA and the flop came A27, it’s unlikely they would spend much time double-checking their cards. Of course, sophisticated players may try to give off ‘false-tells’ in this way, but once you’ve marked a player as being an amateur, this is unlikely to be the case.

Following these simple tips will help you start playing good poker post-flop and give you a better chance of winning money. Just remember to be mindful of the type of hands you play, pay attention to your position at the table, and continuously observe your opponents to try to decipher their likeliest holdings. With a little practice, you’ll be playing like a post-flop pro in no time!