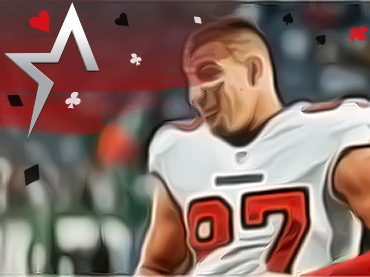 Future Hall of Fame tight end, Rob Gronkowski is retiring from the NFL for the second time. ‘Gronk’ was a free agent after playing the last two seasons with Tampa Bay and the announcement does not seem to have affected the Super Bowl odds much at the Americas Cardroom sportsbook.

Tampa Bay is currently at +778 odds, making them the favorite from the NFC and second behind Buffalo (+610) overall. Tampa was +761 when the odds were released about a month ago. Those odds are listed in parenthesis below.

Another piece of news from the NFL yesterday was that Deshaun Watson has settled 20 of the 24 civil cases filed against him for alleged sexual misconduct. He can still be suspended by the league, likely anywhere from 6 games to the whole year, so bettors need to decide if there’s value in Cleveland’s current +2613 odds.

Looking at the rest of the odds favorites, Green Bay (+936) has now moved ahead of the L.A. Rams (+1026) as the second-favorite from the NFC. The Pack also moved past AFC Kansas City (+961) to become the third-ranked team overall.