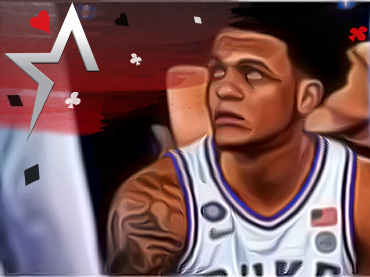 If it seems like the paint is barely dry on Golden State winning the NBA championship, then you’re right as the Warriors clinched the title just 6 days ago.

But in pure genius fashion of the NBA marketing department, they’re keeping the momentum going by hosting the draft tomorrow (Thursday) night from Brooklyn’s Barclays Center.

The top-3 picks in the draft belong to Orlando, Oklahoma City and Houston. That works out well for those teams as there are considered to be three players who have separated themselves at the top of the class. And as you can see below, the odds at the Americas Cardroom sportsbook strongly suspect that Auburn’s Jabari Smith will go No. 1 overall to Orlando.

Duke’s Paolo Banchero has just moved to the second-favorite in the odds. Previously, it was thought that Orlando would take Chet Holmgren out of Gonzaga if they passed on Smith. The 7-foot-0 Holmgren is considered to be a “unicorn” given his ability to shoot from long range and handle the ball. However, he weighs just 195 pounds.

Note there are additional odds available on who will be picked No. 2 and No. 3 overall. There are also odds on a players’ specific draft positioning like Iowa forward Keegan Murray at 5.5. The Under is the heavy favorite at -300.

Finally. there are some select odds available where you can choose between two players and predict which one will be selected first.