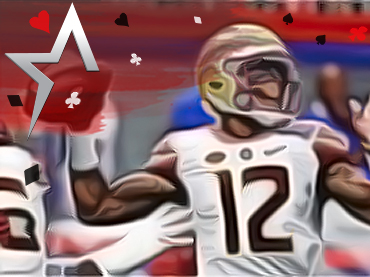 As many fans on Americas Cardroom will recall, NCAA Football 14 was the last season that EA Sports released in connection with NCAA Football, back in July 2013. Nearly a decade later, the franchise appears to be reviving with plans to release a college football video game in the middle of next year. As always, the most exciting speculation is based on who will be the face of the new cover.

According to the criteria of Chad Johnson, who played in the NFL for the Cincinnati Bengals and New England Patriots, Peter Warrick should be the player chosen by the franchise. Both players spent four seasons in the early 2000s with the Bengals. The pair at the time were unstoppable, combining for 43 total receiving touchdowns (Johnson 25, Warrick 18) during their time in Cincinnati.

Prior to being selected by the Bengals during the 2001 NFL Draft, Warrick played for former head coach Bobby Bowden and the Seminoles from 1995 to 1999 in a wide receiver and return specialist role. Warrick was a key player in helping Florida State earn back-to-back BCS National Championship appearances (1998-99), including capturing the program’s second national championship in 1999 against Virginia Tech.

His spectacular performance against the Hokies (two touchdowns and 163 yards on six receptions) led the league to name him the 2000 Sugar Bowl Most Valuable Player. During his final two seasons, Warrick continued to show great value, so much so that he was recognized as a consensus NCAA All-American and was named to the All-ACC (Atlantic Coast Conference) first team in each of those seasons.

All of this has led several colleagues to see him as the ideal person to appear on the cover of the new edition. Even Miami Dolphins wide receiver Tyreek Hill, a six-time Pro Bowl wide receiver, tweeted that it was Warrick who made him fall in love with the sport.