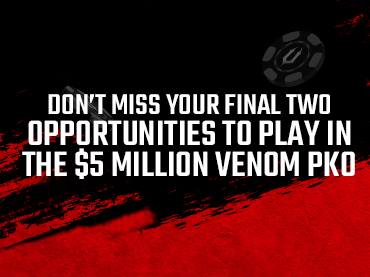 Have you heard that the world’s biggest online Progressive Knock Out tournament is already underway? Yes, the multi-day $5 Million GTD Venom PKO started on Friday, May 13th with Day 1A and continued on Sunday, May 15th with Day 1B.

If you’ve never played in the Venom PKO, it’s an intense tournament with bounties that swell with every round.  That’s because when you start in the Venom PKO, half your $2,650 buy-in funds the prize pool and the other half is your starting bounty.  And whenever you knock someone out of the tournament, you’ll win half their bounty and the other half goes on your head.

When you play in the Venom PKO, the bounties can get huge pretty fast.  As the tournament goes on, a single KO could be worth tens of thousands of dollars!  So, it’s possible to win serious quantities of cash without making the final table.

Now that you know what the hype is all about, it’s time to buy your seat.  But if you don’t have $2,650 kicking around, you can still score your seat  for cheap via our Skips and Venom Blitz Satellites, Steps and freerolls.

Don’t forget that you can also take advantage of our final Venom PKO Fever Monster Weekend on Friday, Saturday, and Sunday.  Some of our satellites award as many as 20 seats!

Here are just some of this weekend’s events:

For the full schedule, visit: www.americascardroom.eu/online-poker-promotions/the-venom-progressive-knockout/#week3

Poker: No Limit, Pot Limit, or Fixed Limit – Which Is Right For You?
13 mins