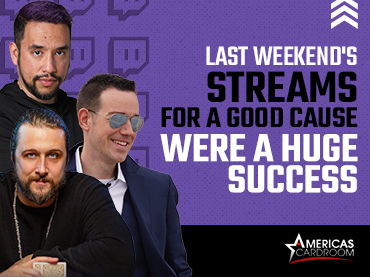 Last week, community members reached out to Stormers Manager Adam ‘IT5PAYDAY’ Neal to see if it was possible for Americas Cardroom to help raise money for regular ACR supporter QueenBlackCat. Sadly, her husband passed away earlier in the week and the community wanted to do its part to help.

ACR Pros Jon Van Fleet, Ebony Kenney, Jon Pardy and Michael Loncar stepped up and offered to host dual streams over two nights. Of course, we jumped at the opportunity to help a much-loved member of the community, so we decided to host two Streams for a Good Cause. Here’s what happened:

Michael Loncar and Jon Pardy dual-hosted and streamed an $11 buy-In $2500 guaranteed tournament, which had the added value of $200 Venom Fever tickets on the heads of both pros. This tournament had an incredible turnout with 402 entrants and a prize pool of $4,020!

Congratulations to NOLIMITHOLDEM for not only winning the tournament, but also scoring a $200 Venom Satellite ticket by knocking out Jon Pardy!

Jonathan Van Fleet and Ebony Kenney dual-hosted and streamed a $16.50 buy-in $4500 guaranteed PKO event. $200 Venom satellite tickets were also put on both pros’ heads. Once again, the whole ACR community rallied together to beat the guarantee with 317 runners and helped put on an incredible stream raising money for QueenBlackCat. 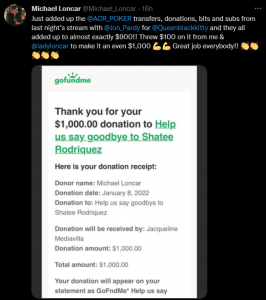 These weren’t the only streams happening this week. The Twitch directory was filled with ACR Stormers who came together and showed support by raising money in their individual streams.

At the start of the first stream on 7th January the total prior to the streams raised was $4020. At the end of the final stream on the 8th January, the community had come together and brought the total to just under the $10,000 mark!

A huge thank you goes out to everybody who was involved in streaming and raising donations in whatever way they could. This couldn’t have been done without the amazing people we have supporting Americas Cardroom.

Staying focused in Texas Hold ’em is challenging, but not impossible
1 hour