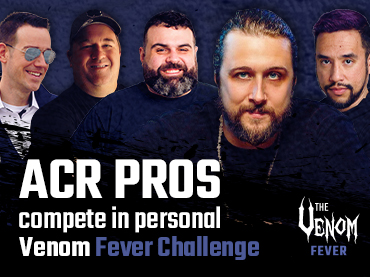 Our Venom Fever promotion, running January 2nd-30th, is awarding over 750 seats to the $10 Million Venom. It’s attracting the attention of a lot of players and even some of our Team Pros.

Jeff Boski (@ICuRaRook), Michael Loncar(@Michael_Loncar) and Ryan Depaulo (@depaulo_ryan) have set up their own personal challenge around Venom Fever. The first of the three to win a $2,650 Venom seats through the $32 Venom Fever satellites wins the competition and gets an additional $2,650 Venom ticket courtesy of Americas Cardroom.

And if you want to get into the action, you can check out Boski’s Twitter account for more giveaways.

We caught up with all three Team Pros to see what they have to say about this challenge, plus the Venom (and Venom Fever) in general.

Boski: I came up with the Venom Fever Challenge as winner-take-all satellites are very exciting and devastating at the same time. If I can battle Loncar and Depaulo in a race to win the Venom ticket first, it makes it even more exciting. I enjoy the Venom Fever satellites in general because they run on a daily basis and the structures are very good for the purpose. The winner-take-all mentality is a new twist on ICM which challenges you to play a “go big or go home” strategy. Who is gonna win this challenge? Let’s just say I always bet on myself.

Loncar: The thing that I like the most about Venom Fever & the Venom is you can turn a small amount of money into a life-changing payday ($1 Million top prize). All the best players in the world come out for the Venom which also heightens the intensity because you know how much sweeter that first place prize would be knowing that you beat the best. Who is gonna win this challenge? I think it’s gonna be me as I’m really confident in my satellite game.

Depaulo: What I like the most about the Venom is its insane ($10 Million) guarantee and everyone in poker is paying attention and sweating each other. I love Venom Fever because it’s truly possible to turn $32 into $1 Million (the top Venom prize). And there are also more expensive Venom satties available too if you want to go that route. Who is gonna win this challenge? I’ll say Jeff but only because I want to add a reverse jinx to my already massive edge in skill!

Staying focused in Texas Hold ’em is challenging, but not impossible
1 hour