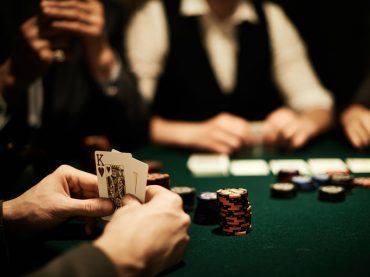 It sometimes seems strange that the most satisfying, and exhilarating, aspect of the game of poker – bluffing over multiple streets – is usually one of the most misunderstood and least-executed plays of them all. Even with the immense focus on aggression over the past few years on poker telecasts and training sites throughout the poker world, bluffing strategy, and multi-street bluffing in particular, still seems to be a bit of a mystery to those trying to learn how to play poker for the first time. However, the reality is that as long as you’re not competing with a table-full of experienced high-level players, no skill-set will earn you more money at the poker table than learning how to bluff aggressively and consistently.

We’ve all heard the old poker wisdom that when you bluff you give yourself two ways to hand the best hand: by having the best of it and by getting your opponent to fold the best hand. And yet, time after time we can see inexperienced players refuse to put much of an emphasis on it beyond a standard continuation-bet or at most a check-raise bluff on the flop without a committed follow-through on later streets.

That’s why today we’re going to look at three relatively common poker scenarios that you’re likely see in various forms each and every time you sit at the table. So although, we’ll be looking at specific hand examples to better paint the picture, make sure to note the reasoning for each particular spot that can help you regardless of your exact holdings.

Our Holding: 87 of hearts
Our Position: BB
Our Opponent’s Position: BTN
The Board: 6hTs5d3hAd

The action: We call a standard button-raise from the big blind. An argument can most definitely be made for 3-betting this hand but for this scenario we elect to flat-call.

When we flop the nut gut-shot with 2 over-cards to 2nd pair and a back-door flush-draw we can very confidently check-raise a typical continuation-bet because we obviously can’t win at showdown and the board hits our big-blind calling range much better than our opponent’s button range due to its low-card texture.

On the turn we’ve now picked up that backdoor flush-draw and since we still have no showdown value, we can stick to our story and bet again. Besides, any value hand that was checkraising the flop (ie sets, two pairs, top-pairs, and over-pairs) would all continue to bet in this spot as well.

On the river, although many inexperienced players would give up here while cursing the poker gods for ‘never’ completing a draw and ‘only’ bringing an ace on the river when they don’t need it, this is actually a really great card for us to complete our triple-barrel bluff on. While our opponent can have a fairly wide range of hands in this situation, they only ones we’re worried about in regards to the river ace is a now two-pair hand like A5/A6 as well as some small percentage of an extremely sticky AQ/AK hand.

So with so few combinations killing our bluffing-action, and our range looking strong as heck – after all, how often do people raise a bluff on this type of board and then barrel off even on the river ace? That’s right, not often, which is exactly why it can be so powerful – this seems as good a spot as any to push the fear of an embarrassing snap-call aside and put the pressure on our opponent to either be lucky to have a big hand or have to make a hero-call in a dangerous spot. If you’re not used to utilizing this type of aggression, you’re likely going to be pleasantly surprised by how big of hands people will actually fold exactly because it is such a hard bluff for most to make.

Our Holding: the same 87 of hearts
Our Position: BTN
Our Opponent’s Position: BB
The Board: Qh4x5x9hK

This is essentially the exact same play as the first hand in a format most players are more familiar and comfortable with – a button continuation-bet versus a big-blind caller.

Much of the analysis for this hand is a duplicate of the last one; still, it’s good to review. On the flop we once again have no showdown equity, but do hold the gut-shot draw with 6 outs to 2nd pair, as well as the backdoor flush-draw, so good enough for a bet. It’s important to recognize before making the bet that one check-call from our opponent should not be in and of itself warrant slowing down.

When we pick up the flush-draw on the turn once again, and still have no showdown equity, we can continue betting and put all weak draws and low-pairs to some very tough decisions.

When we miss on the river and our opponent checks a third time, this is the time to find the courage to triple-barrel, as we have nearly all the nut JT combinations in our range since the odds of him check-calling that hand twice is highly unlikely while completely reasonable for us to play in the same way. This puts us at an extreme range advantage, which we should take advantage of. As we know, poker is a game of thin edges, so when we have a crystal-clear one such as in this spot, we must attack it with near-reckless abandon and let the chips fall where they may.

Our Holding: T8
Our Position: SB
Our Opponent’s Position: BB
The Board: A76JK
The Action: the table folds around to us in the small-blind so we put in a standard raise and our opponent calls from the big blind.

Since we know most of our opponent’s Ax hands 3bet preflop so we rep it better than he does which means an automatic cbet for any of our hands that have some equity but no showdown value. The J turn is a scary over-card to his middle and bottom pairs, which are his likeliest value holdings so we must continue betting our thinning equity. On the river although we are officially dead, the one thing we have going in our favor is that we block the combos to the nuts with our ten (meaning that he is vastly less likely to be holding QT with us having one of those cards in our hand). Therefore, unless he’s been trapping or pot-controlling some weak Ax hand, a final bullet from our triple-barrel will likely get folds out of most of his marginal 6x and 7x hands, as well as from low and middling straight draws, low pocket pairs that decided to get sticky on the turn and, if we bet large enough, maybe even some Jx hands like J8-JQ.

When we take all that into consideration in addition to having the range advantage of being the preflop aggressor on an Ace-high board, this is yet another spot where absent any reads to the contrary, we must remain aggressive, fire that final shot, and be OK with tapping the table in acknowledgement when our opponent hero-calls and takes down the pot.
As the late poker legend Amir Vahedi once said: in order to truly live, you must be willing to die.

This poker strategy article has brought to you by Top 10 Poker Sites, a site featuring in-depth reviews and bonus information to the best legal US poker sites.